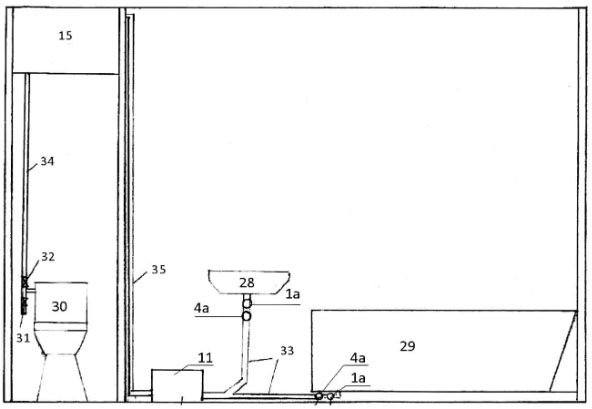 Outline
Closed system, individual or combined, semi-automatic or automatic, domestic water recycling equipment configuration, which reutilizes primary sewage water (so-called gray water, ie: shower panel, bathtub, washbasin, sink, washing machine, and dishwasher, etc.) generated within the dwelling unit to flush the toilet. The configuration comprises a filter (1a), a pump (10), a pre-tank (11) and a collecting tank (15), as well as a water flow control switch (4a) for directing the used water between the system and the sewage drain, and the switch (4a) one branch of the double branch connection point on the outlet side is connected to the sewer and the other branch is connected to the pre-tank (11), which collects the water for recycling for the pump (10) in the pre-tank (11) and detects the incoming sends a signal to a control unit, which causes the pump (10) to pump the used water for recycling to the collection tank (15), which collects, stores the used water for recycling and fills a toilet flush tank, and which collection tank (15) comprises a sedimentation tank (24), an upper level float (16), a lower level float (17), and a chemical holder; a double-sided connection, lower spout, a microswitch (18), and a chemical dispenser.